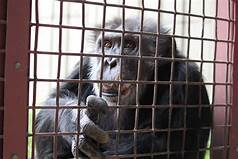 A number of years ago a female Chimpanzee named Washoe was being taught how to use sign language with simple recognition at the University of Oklahoma.

Since 1966, this Chimp had learned 140 signs and around 1980 the project directors decided that Washoe was ready to express thoughts of her own, instead of just imitating some human’s words.

Washoe was a pampered animal in the university’s lab.

She was well-fed, physically comfortable, and safe from harm.

And yet, when she was able to put words together on her own into a phrase, these were the first three words, “Let me out” and she said them repeatedly!

Washoe wanted to be free more than anything else, and it was the most important thing to her.

Our spiritual freedom as believers is far more important.

We can have all the physical comforts and security in this life, but if we are not living spiritually free, we really don’t have anything.

“It was for freedom that Christ set us free; therefore keep standing firm and do not be subject again to a yoke of slavery.”

Our freedom was purchased by Christ and through faith in Him we have been set free.

There are several things we are set free from:

Brothers and sisters, Christ has set us free and yet many believers are still in chains, still in bondage to legalism, still shackled by guilt and fear, by sinful habits, by fleshly living, by the world around us and the deceptions of the devil?

Christ has set us free to enjoy His resurrection life.

A life that is lived by His power to love and serve Him and others.

We are free to be selfless rather than selfish! The words “for freedom” in Gal. 5:1 has an interesting background among the Greeks.

A slave could be set free by being purchased by a god.

As the slave could not provide the money, the master paid it into the temple treasury in the presence of the slave.

Then, a document was drawn up containing the words, “for freedom.”

No one could enslave him again, since he was now the property of the god.

So we were slaves to sin and we could not purchase our freedom, but Christ purchased it for us by His blood.

A document was written up with the words “for freedom” on it and never to be enslaved again because we are now the property of our God!

A number of years ago, there was an article in a newspaper which told about an inmate in a penitentiary who had lived all but 16 months of his 39 years in various penal institutions.

His mother was a convict in a women’s reformatory where he was born.

He spent the first 14 years of life in prison as a ward of the court.

When he was released, he committed a succession of crimes.

He explained his behavior by saying, “I don’t know how to live on the outside. My home is inside, and I want to stay here for the rest of my life.”

This unfortunate man found security in his bondage.

Jesus said: “So, if the Son sets you free, you are free indeed.”