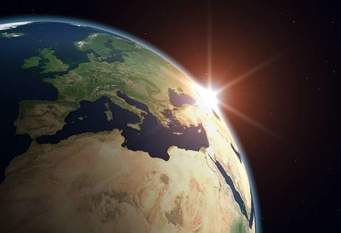 One of my favorite portions of Scripture is Romans 5 through 8.

In Chapter 8, Paul describes the earth as groaning as it waits for the Lord to redeem it.

The older I get the more I groan too…every time I stand up!

In Revelation 5, John sees a legal transaction take place when the deed of the earth described as a scroll with seven seals is redeemed by the Lamb who was slain.

In Bible times, if a person faced financial difficulties he could sell his land with the option to redeem it by fulfilling the stipulations detailed in the redemption contract within the allotted time frame.

If he could not redeem it, a kinsman could do so in his place, thus keeping their inherited land in the family.

If no one could redeem in within the allotted time frame, it would become the buyer’s land permanently.

In the Old Testament, we see the kinsman redeemer exemplified in the book of Ruth.

In the New Testament, we see Jesus act as our redeemer when He shed His blood to purchase us back from sin.

But, we weren’t the only beneficiaries of His payment.

He also purchased back the earth that Adam had sold to Satan through his transgression.

So, in the scene that unfolds before John, there is a deed with seven seals, and the angel cries out, “Who is worthy to open the seals?”

John weeps for he sees no kinsman step up until suddenly he sees a Lamb that was slain.

Not only has His blood paid for our redemption, but it also bought back the earth and all creation.

The scene in Revelation 5 is the starting point of Jesus taking back the earth from Satan.

Beloved, there are so many indications, including an increase in earthquakes, that point to the near return of Jesus to catch away His bride.

While we wait, we need to boldly declare the redeeming power of the blood of Jesus so that many more can join us at the wedding feast.

Satan has no answer for the Blood of Jesus.

His fate is sealed.

So, join me in rejoicing in the finished, redeeming work of the Blood of the Lamb!

Indeed, there is wonder working power in the precious Blood of the Lamb!