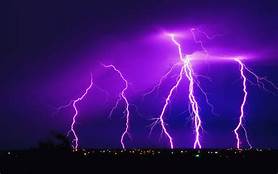 According to the National Geographic, about a 100 lightning bolts strike the earth’s surface about every second.

Despite its commonality, the facts about lightning still boggle the mind.

Each bolt of lightning can contain up to one billion volts of electricity.

These bolts of energy streak toward the earth at around 200,000 mph, heating the air to five times hotter than the surface of the sun.

Lightning is truly a great example of God’s power.

Around the nation of Israel, many cultures worshiped storm deities.

In Psalm 29:3-4, 7, David uses this storm imagery and applies it to our powerful LORD.

David is arguing that thunderstorms demonstrate the Lord’s power and should not be attributed to Baal or any other false god.

David wants us to be overwhelmed by our Lord’s greatness.

We should see in God’s creation His attributes and glorify Him for His mighty power.

We should also remember that His power is a resource for us, because we are indwelt by God the Holy Spirit.

The God of creation is also the God who will live through us by His power as we yield to the Holy Spirit moment-by-moment.

When we walk by the Spirit, we are displaying His greatness and power to others.

He had called himself “the Great,” and was the monarch who made the famous statement, “I am the state!”

His court was the most magnificent in Europe, and his funeral was equally spectacular.

As his body lay in state in a golden coffin, orders were given that the cathedral should be very dimly lit with only a special candle set above his coffin, to dramatize his greatness.

At the memorial, thousands waited in hushed silence.

Then, Bishop Massilon began to speak; slowly reaching down, he snuffed out the candle and said, “Only God is great.”

How long has it been since we were overwhelmed by God’s greatness?