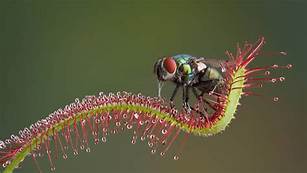 In the Australian bush country grows a little plant called the sundew.

It has a slender stem and tiny, round leaves fringed with hairs that glisten with bright drops of liquid as delicate as fine dew.

Woe to the insect, however, that dares to dance on it.

Although its attractive clusters of red, white, and pink blossoms are harmless, the leaves are deadly.

The shiny moisture on each leaf is sticky and will imprison any bug that touches it.

As an insect struggles to free itself, the vibration causes the leaves to close tightly around it.

This innocent-looking plant then feeds on its victim.

Such is the luring power of temptation.

“Let no one say when he is tempted, ‘I am being tempted by God; for God cannot be tempted by evil, and He Himself does not tempt anyone. But each one is tempted when he is carried away and enticed by his own lust.'”

James concludes that God permits us to experience trials, but He is NOT the source of temptation.

How often when we experience temptations do we tend to look for something or someone else to blame.

As humans, we tend to attribute difficulties as evil, and we can be tempted to blame God.

“People ruin their lives by their own foolishness and then are angry at the Lord.”

James makes it very clear that even though God allows us to have trials in life; we cannot draw the conclusion that He is tempting us to sin.

When we make this wrong conclusion, it might encourage us to give in to sin.

God is never the source of temptation.

He does not try to get us to sin, even though some people blame God for their sins. He, Himself, is not even subject to temptation because He is totally separate from sin and not susceptible to evil.

God allows other things to tempt us, namely, the world, the power of sin working through the flesh, and the devil, but this does not mean that He is responsible for sin.

We all may know people who have ceased to walk with the Lord under the pressure of temptations to sin.

Rather than blaming God, we need to recognize that we are responsible when we yield to temptation, not God.

God grows us up by allowing certain experiences to come our way, though He Himself only gives good gifts to His children.

James makes it clear that God is not the origin of temptation, but it is our own personal desire born out of selfishness that makes us susceptible to temptation to sin.

The word lust refers to fleshly, selfish, illicit desire or sinful desire. In this context, it is the desire to do, have, or be something apart from the will of God.

How often are we drawn away by our selfish desires for something?

It was like the pastor who was tempted by a large donation to his church.

Two brothers had terrorized a small town for decades.

They were unfaithful to their wives, abusive to their children, and dishonest in business.

Then the younger brother died unexpectedly.

The surviving brother went to the pastor of the local church.

“I want you to conduct my brother’s funeral,” he said, “but it’s important to me that during the service, you tell everyone my brother was a saint.”

“But he was far from that,” the minister countered.

The wealthy brother pulled out his checkbook.

“Reverend, I’m prepared to give $100,000 to your church. All I’m asking is that you publicly state that my brother was a saint.”

On the day of the funeral, the pastor began his message this way.

“Everyone here knows that the deceased was a wicked man, a womanizer, and a drunk. He terrorized his employees and cheated on his taxes.”

“But as evil and sinful as this man was, compared to his older brother, he was a saint!”

Romans 6:11 gives us the answer to temptation:

“Count on the fact that you are dead indeed to the power of sin and alive to God through Christ Jesus.”