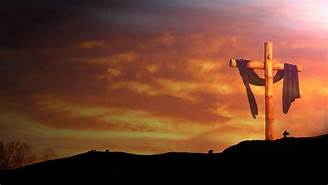 We’ve just celebrated the resurrection of Jesus Christ which we know is the proof that His blood was accepted as payment in full for the sin of mankind.

Recently, I came across a seemingly random law in Deuteronomy 21:22, 23 which states,

“Now if a person has committed a sin carrying a sentence of death and he is put to death, and you hang him on a tree, his body is not to be left overnight on the tree, but you shall certainly bury him on the same day (for he who is hanged is cursed of God), so that you do not defile your land which the Lord your God is giving you as an inheritance.”

This got me interacting with the Lord on the question of why Jesus died on a tree.

There were no offering or sacrifice laws that called for death on a tree.

A lamb, goat or bull was sacrificed by slitting its throat and collecting the blood.

In the Law, if a person was guilty of a sin unto death, they were stoned.

The Mosaic Law was put in place to show mankind his sin and his need for atonement, but it could not fully atone for sin.

The sacrifices needed to be repeated over and over.

It was insufficient to pay the penalty for sin in full.

Jesus’ priesthood is an eternal priesthood which is superior to Aaron.

May I offer a possible explanation as to why Jesus had to die on a tree and not be stoned.

Let’s go back to the Garden.

What were Adam and Even told not to do?

Right, eat of the Tree of the Knowledge of Good and Evil.

The tree was the means of producing the forbidden fruit.

In order to pay the sin debt, He had to be nailed to a tree.

Paul tells us that the certificate of our debt was nailed to that tree.

Perhaps, this seemingly random law was not so random.

Perhaps, it was placed there just for the cross of Jesus.

Notice the details of not leaving the body there overnight, but instead burying him the same day.

Why? to not defile the land.

In redeeming mankind from the sin debt, He also redeemed the earth and all Creation.

His cross represented the Tree of the Knowledge of Good and Evil.  He died on that tree, so that we could be set free from its curse and once again be free to eat of the Tree of Life… Jesus Himself.

Jesus is the Way, the Truth and the Life; no man comes to the Father but by Him.